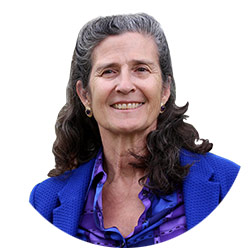 Roxanna Erickson-Klein is the 7th of the eight children raised by Milton and Elizabeth Erickson. She, like her siblings was taught about hypnosis from a very early age, and like her sisters embarked on a career in which that knowledge could be applied in clinical settings. Roxanna received a Bachelor of Science in Nursing from Arizona State University, and a Masters in Nursing from Texas Women’s University. She later became interested in health care administration and earned a Doctorate of Public Administration from University of Texas. After that, her interests focused on Counseling, and she received a Masters in Counseling from Argosy University. She has earned certification in Substance Abuse counseling as well as in EMDR. She has invested considerably in volunteerism and currently serves as The President of the North Texas Society of Clinical Hypnosis.
A member of the Board of Directors for the Milton H. Erickson Foundation, she has a passion for writing, and has made a respectable contribution to the literature— primarily clinical in nature, and memoirs about learning from her father.
Currently in part time private practice in Dallas, Texas. She does both on-line and face-to-face counseling and consultations.