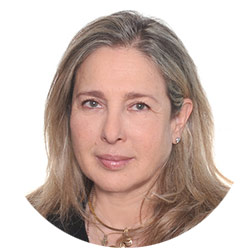 Ms Malvina Tsounaki is a Clinical Psychologist, Ms., and a Couples and Family Therapist educated in the U.S.A and in Greece. She has been trained in Family therapy, Group therapy and Ericksonian Hypnosis. She is in private practice in Athens, Greece and is a trainer and supervisor at the Athenian Institute of Anthropos. She conducts Experiential Workshops and has presented in the European Family Therapy Association (EFTA) Conferences and elsewhere. She has been an elected board member in EFTA (2004-2014) and a founding and board member in the Hellenic Association for Systemic Therapy (1998-2012).

Born and living in Athens, she has a son and four dogs.